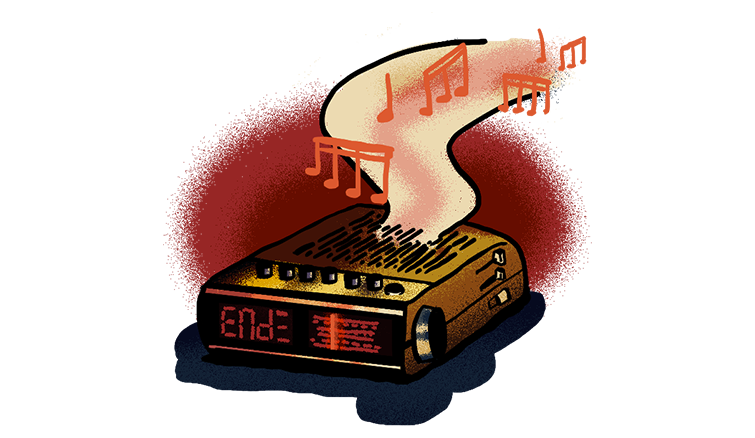 It was funny how noth­ing and everything burned in those days.

Our skin un­der the sun blazed un­bear­ably but without really get­ting warm, and would be left with red scorch marks even be­fore the body had time to grow hot if we didn’t take care. The heat reached much farther in, through dermis, through epi­dermis, through… whatever other lay­ers there are. It was as if some­thing was burn­ing in­side us.

And yet, we spent all our days un­der the sun, liv­ing a slow death.

There was a time in which I would wait for it to cool. I’d blow at the hot li­quid and still burn my tongue when I tried to drink it, and I’d re­gret that for a day or two. Nowadays there’s no dif­fer­ence, and there’s smoke still spiral­ing up from the wa­tery cof­fee in my cup as I bring it to my mouth.

There are things that burn much harder, and those are the ones that frighten me.

Ari plays an old song in the an­cient ra­dio — someone singing about feel­ing his bones on mine — and then he sits by my side, serving cof­fee in his calm, quiet way, as he re­peats the chorus in an Eng­lish we never man­aged to learn.

It’s not too dif­fi­cult to feel his bones on mine these days.

It’s a bit too late for re­grets, any­way. We can only look for­ward.

I drop the empty cup and close the belt on my faded beige over­alls that pro­tect me a little from the scald­ing sun. I fit the cap over my shaved hair, hid­ing the vis­ible scars where my curls haven’t grown in the five years since 2047. I un­settle Ari’s hair as I re­hearse some dance moves with him, mess­ing around more than any­thing else. I wish I could laugh like him, show­ing all the teeth as if we didn’t live in that dump of a house, in that dump of a life. But I can’t, not al­ways; not today.

It’s my turn to work.

I get on the rusty bi­cycle and pedal around the dan­ger­ous car grave­yard, where we gather old vehicles. They were aban­doned on the streets when the Ra­dio­act­ive War brought an end to fuel as it did to everything else. I pass by the gar­age and wait for Juca to put a re­treaded tire on the bike. We’ve got an ar­range­ment, and I’ll get him some­thing in ex­change. Then, I hurry to the beach with the empty gal­lon tied be­hind the bi­cycle.

It’s empty be­cause no one risks go­ing there without reason. Even at night, the sand burns with the re­mainder of the sun’s heat, and it’s stained with black, vis­cous oil. The wa­ter is pois­on­ous to us as well, and swim­ming is im­possible. The con­tam­in­a­tion is so great that after three breast­strokes your skin would start to slough off. In fact, there’s barely enough clean wa­ter for bathing these days. But I know what to do with this sea­wa­ter.

I fill the gal­lon without step­ping into the wa­ter, us­ing a lever at­tached to its mouth, and I pull it back to the sand with some dif­fi­culty. I close it tight be­fore I risk car­ry­ing its weight to the bi­cycle.

I have to make sure the wa­ter is se­cured firmly, so it won’t spill. I pedal more care­fully now. We used to have a cart that we’d at­tach to the bike, but it was stolen by the ar­son­ist gangs and we couldn’t get hold of an­other. Now the way is to do everything slowly, by hand.

I stop by the shop be­fore I go back, to get a pack­age for the gar­age owner, a heavy bundle of some­thing dark. I don’t know what it is. The dense smell of gun­powder sug­gests some things, but I’d rather not know. Know­ing too much is dan­ger­ous. Not every­one is happy about what happened, and it’s bet­ter to have those people as friends rather than en­emies.

Juca re­ceives his pack­age quietly, with wary eyes, but I say noth­ing. I go back home in si­lence.

Ari is wait­ing for me by the fil­ter, ready for me to pour the wa­ter as soon as I ar­rive. I dump the gal­lon and let it work. I need to go back for more. Each one of us makes that trip at least three times a day. It’s ri­dicu­lous work, with all the obstacles we need to get past, but that way we can make al­most thirty liters a day. We put apart a liter per day for each of us after fil­ter­ing, which is enough to go on liv­ing, and we sell the rest.

The wa­ter’s not quite top qual­ity, but it’s cheap, at least. Our buy­ers know very well where we get it from, they know there’s still some ra­di­ation in there.

But it’s a choice, like everything in life; die of thirst now, or die slowly of can­cer. We just choose the slow way.

No one here has given up on life yet, not really.

We also sell the salt that comes off dur­ing fil­ter­ing, since iod­ine pro­tects a little against ra­di­ation. It fetches a high price, and we can make ends meet like that. We can pay for food and help our fam­ily, what’s left of them any­way. I have an older brother, who lives with his wife and daugh­ter, my niece, and Ari has a young cousin liv­ing with his aunt. He was born with a de­form­ity be­cause of the ra­di­ation. We all need help every once in a while, es­pe­cially the chil­dren, so we help. But we couldn’t bear to live with them any­more. Not with the daily ar­guing, im­possible to avoid when we were all squeezed to­gether in such a small space and in such pre­cari­ous con­di­tions; and not watch­ing the chil­dren go through so much suf­fer­ing, hav­ing to pre­tend it was all right.

That situ­ation made every­one angry all the time, and we wanted some peace. It’s worth the price of shar­ing this small place between the two of us, a place I couldn’t wait to be able to come in and not need to leave any more for the day. But, when I’m com­ing back from the third trip, that’s when things go wrong.

The night is fall­ing and I am more alert, even though there’s still some light on the ho­ri­zon, mark­ing the way sharply. But I still fail to see the ar­son­ist gang that moves out of the cars when I pass by the grave­yard for the last time.

The ar­son­ists are our private night­mares, in a world in which the flames of chem­ical fires still haven’t died down. We are all fight­ing, all of us, to keep ourselves alive, to sur­vive, to help ours. In a way, they’re do­ing the same things, but they don’t mind burn­ing some of us to get what they want.

I can’t see them, but I can hear their laughter. I hear the wheels be­hind me, and voices call­ing me out.

I don’t even look back, I just speed up.

The wheels be­hind me speed up as well, and the crazed laughter is now aw­fully close.

“Wait up, sea prin­cess! We just wanna chat!” some guy calls out, without even need­ing to shout, and I know I’m screwed.

They’ll catch up to me, I’m too slow car­ry­ing the gal­lon, and it’s many against one. Even if I made it home in time, I and Ari alone wouldn’t be able to handle a bunch of ar­son­ists.

When we come to an up­hill road, I make my de­cision.

I pull off the gal­lon’s lid, and I take out the small knife I leave fastened to my pants for emer­gen­cies. As I man­age to cut off the rope hold­ing the gal­lon, I fall over with the bi­cycle. While I try to con­trol my fall, I see the tain­ted wa­ter fly­ing to­wards them. My plan worked.

They are startled and they also fall, blinded by the wa­ter for a few seconds, and I can’t stop my­self from get­ting wet in the puddle I’ve cre­ated, but I don’t stop to think be­fore I climb my bike again and run home.

I run in and lock the door, and Ari rushes to me.

“Dam­mit, Çu![1]” he shouts, amidst curse words, and helps me out of my drenched over­alls.

He has me enter the small bath­room and runs to the kit­chen while I strip. The wa­ter he brings me is ex­pens­ive and costs our live­li­hood, but I don’t com­plain as he pours nearly two liters on me, let­ting me rub the rest of the coconut soap in my body be­fore pour­ing two more liters, clean­ing me. The cold wa­ter doesn’t even make me shake.

When I’m done, he hands me the towel and leaves me alone while he runs to re­in­force the en­trance. I already see some wounds crawl­ing up my legs, burn­ing without pain, but we’ve done all we could. I quickly put on some dry clothes that let my skin breathe, and run to the door, ready to help de­fend our home.

“Did they see you come here?”

I think about it, re­tra­cing my path.

“I don’t know. I think I lost them shortly after the grave­yard, but we were pretty close to here already.”

He nods and doesn’t an­swer, and I see the wrinkles in his fore­head deepen.

When night falls, our house stays dark, like an­other aban­doned house in the neigh­bor­hood. Not even the moon shows up, hid­den be­hind the dense layer of pol­lu­tion caused by the factor­ies’ ex­plo­sions and the fires.

I hold my metal stick in my hands, as firmly as I can, and I know Ari is as ready as I am.

He holds my hands in his, so warm, in the dark, and I hold them firmly too, feel­ing his bones against mine. It’s his warmth that spreads through me, to a place far bey­ond my skin, that gives me a last grain of peace.

“We’ll fight to the end, Açu­cena. Today and al­ways.”

“Every day, Ariano” I an­swer, know­ing no one can hear our vows.

Hand in hand, the end is not that ter­ri­fy­ing.

Lais Dias de Sousa is a law­yer, born and raised in the city of Aracaju, cap­ital of the small state of Ser­gipe, but she has al­ways lived more in books than any­where else. It is in writ­ing that she finds who she really is on a daily basis, and it could not be oth­er­wise, as she al­ways dreamed of telling the stor­ies that pop­u­late her head and in­creas­ingly over­flow through the blank pages.